Hogladanga village is located in the urban fringe or peri-urban areas of Khulna city around eight kilometersfrom the citycentre. It is a village of JalmaUnion under Batiaghata Upazila. According to the 2011 Census report of Bangladesh Bureau of Statistics (BBS), 237 households live in this village.Migrating people are settling inthevillage, attracted by the nearby urban centre. Agriculture is the main occupation, with mostly tenant farmers who share their crops with landlords and water vendors. IRRI rice is the main crop in Hogladanga village. Activities in the aman (rainy months) season are shifting to white fish aquaculture instead of paddy because of low profit from rice.

Both surface and groundwater are the sources of water. Groundwater from deep tube-wells is mainly being used for drinking and household purposes, but also being used for irrigation to a limited extent.Use of shallow groundwater sources is limited due to salinity problems. A massive canal once flowed through the village but now it is almost dried out. Land encroachment is predominant here which is leading to the death of the canals and water bodies. Major water related issues in this area include scarcity of safe drinking water due to shortage of deep tube well, salinity intrusion in ground water,excessive iron and chloride contamination in drinking water, water logging and drainage congestion, siltation/sedimentation in canals, canal encroachment and improper management of sluice gates to maintain systematic water flows to the river and from the river. 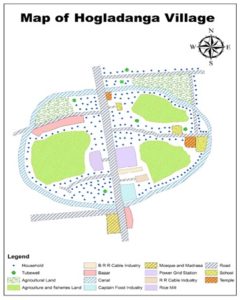 Water quality of shallow tube wellless than 400 feet depth is not good. Presence of salinity and iron in shallow tubewellwater depth should be 1000 ft. to 1200 ft to get good quality water. People of the village have limited opportunities to avail deep tube-well water for drinking and domestic purposes, as there are only four of such tubewells in the village. Thus, many need to travel a long way to fetch water. To avoid long travel,people collect water for drinking and domestic uses from nearby shallow tube wells. Mostly women and girls collect water from the tube-wells.In addition thatdeclining of groundwater table make it difficult to get enough water from tube-wells in dry months. The Department of Public Health Engineering is the government department responsible for distribution of tube wells for drinking water and domestic uses. However, the villagers do not get necessary number of tubewells for the village. The villagers need to deposit BDT 6000 to the upazillaparisad to get a tube-well but in most cases they get their money back due to the shortage of quota for the village. The government allocation of tube-wells could not meet the demand of water in Hogladanga village. Currently more than two hundred families depend on just six deep tube wells.