Skip to content
Home > Uncategorized > Groundwater Mining in Bodai: Who is to be blamed?
Published February 28, 2018 by admin

Groundwater Mining in Bodai: Who is to be blamed?

The following blogpost was written by Shifting Grounds researcher Poulomi Banerjee. In this blog, she shares her first impressions from a recent interview- and data collection campaign in one of  the peri-urban study villages near Kolkata.

‘Ei Somoi’, a local daily, reported an alarming fall in the groundwater level and an increase of the semi-critical blocks in the neighboring districts of Kolkata. The report was based on estimates made by the Government of India’s Central Groundwater Board (CGWB), and the Government of West Bengal’s State Groundwater Investigation Directorate (SWID). Intensive tube-well irrigation and a lack of recharge were considered responsible for such rapid fall in the groundwater level. Boro rice farmers were particularly blamed and the state was urged to revisit the Groundwater Act of 2011 that gives farmers an exemption of SWID certification to construct tube wells below 5 mph. Highlighting the lack of in-depth scientific research on groundwater in the state, the report partially surfaced the growing concern of falling aquifer levels in the otherwise water-rich delta state of West Bengal. The concerns and arguments put forward in the article hold particularly true for rural Bengal. However, one of the critical points largely circumvented, is the role of industries in indiscriminate extraction of groundwater, particularly in the peri-urban areas of Kolkata.

Small-scale manufacturing industries have mushroomed around Kolkata since 2000 in several blocks of North 24 Pargana.  Rich aquifers (within 80 ft) and the past government’s  industrial policy has caused drastic change in the land use and land cover of several villages in the district. Industries have emerged as powerful actors sharing the aquifers with boro farmers. Backed by local political interests, industrial actors got access not only to the agricultural land but also to groundwater, through the construction of deep bore wells. The resulting indiscriminate abstraction, out-surging groundwater recharge, is responsible for the fast increase in the critical groundwater blocks in peri-urban districts. Several villages in the block of Barrackpore 1 and 2, Barasat etc. have lost substantial agricultural land and allied livelihood sources, bringing poor and marginal farmers under acute distress. Bodai village of Barrackpore II block of North 24 pargana is one such case, where since 2002-03 industrialization has taken over substantial of the fertile agricultural land and two out of three deep tube-wells meant for irrigation.

Despite of its close proximity to Kolkata, and political sensitivity, Bodai had a traditional agriculture-based economy. Three public deep tube wells, promoted by the Irrigation Department in the 1980s, formed the main irrigation sources for the village, while complementary usage of surface water from Khals (natural drainage channels) is in practice since ages. Government’s support for farmers is reflected in occasional rejuvenation of the Khals, provision of pumps, motors and deepening the depth of boring.

The village saw changes in early 2000, more particularly from 2011 when it lost two of its deep tube wells to industries. The one currently working with 90 acres of command area and 200 farmers is under serious threat from industries and real estate agents. For the last 10 years the motor of the groundwater pump has failed several times while the depth increased from 30 ft to 850 ft. Farmers who tried boring private mini deep wells of around 100-150 ft  have remained unsuccessful as the groundwater table has depleted rapidly.  Cultivation of water intensive vegetables, grains and fruits like small onions (choto Piyaj), spinach (piyaj koli), pulses (khesri, musur), bananas have either disappeared or drastically abridged due to water scarcity. Farmers reported increase in the pumping hours and number of watering for most of the vegetables and grains. Dumping of industrial pollutants on the agricultural land and water logging due to blockage of the natural channels by large real estate companies has further increased the plight of the majority of farmers of Bodai. 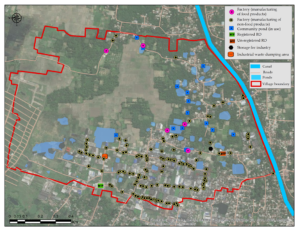 Picture 1 – location of industries in the village. 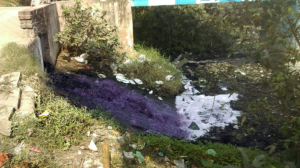 Picture 2 – waste water flow from factories to canal. The flow is continuous all the year round.

Against the groundwater irrigation, operating mostly in pre-monsoon season (Boro and Ayush), industries reported 24 hours extraction for the entire year. Bodai has 300 odd industries, mostly textile and dyes, heavily water dependent. Apart from few big players they are often small to medium scale in its operation, with no proper waste disposal system and not registered under the Land Conversion Act. Their existence remains in ambiguity, as they are mostly located along the agricultural field. Each of the factories has deep tube wells pumping the groundwater 24 hours all the year round. Several attempts of the government to control the indiscriminate pumping of the groundwater have failed to work on the ground. Apart from the affected farmers who lost their agricultural land, villagers were surprisingly silent to the actions of the industrial players. There are even factions within the farming groups, resulting from the emergence of a middle men who are were once small farmers but moved out of agriculture. The newly created nexus of industries, middlemen and local political leaders, are playing a critical role in groundwater mining, while farmers are struggling to survive.